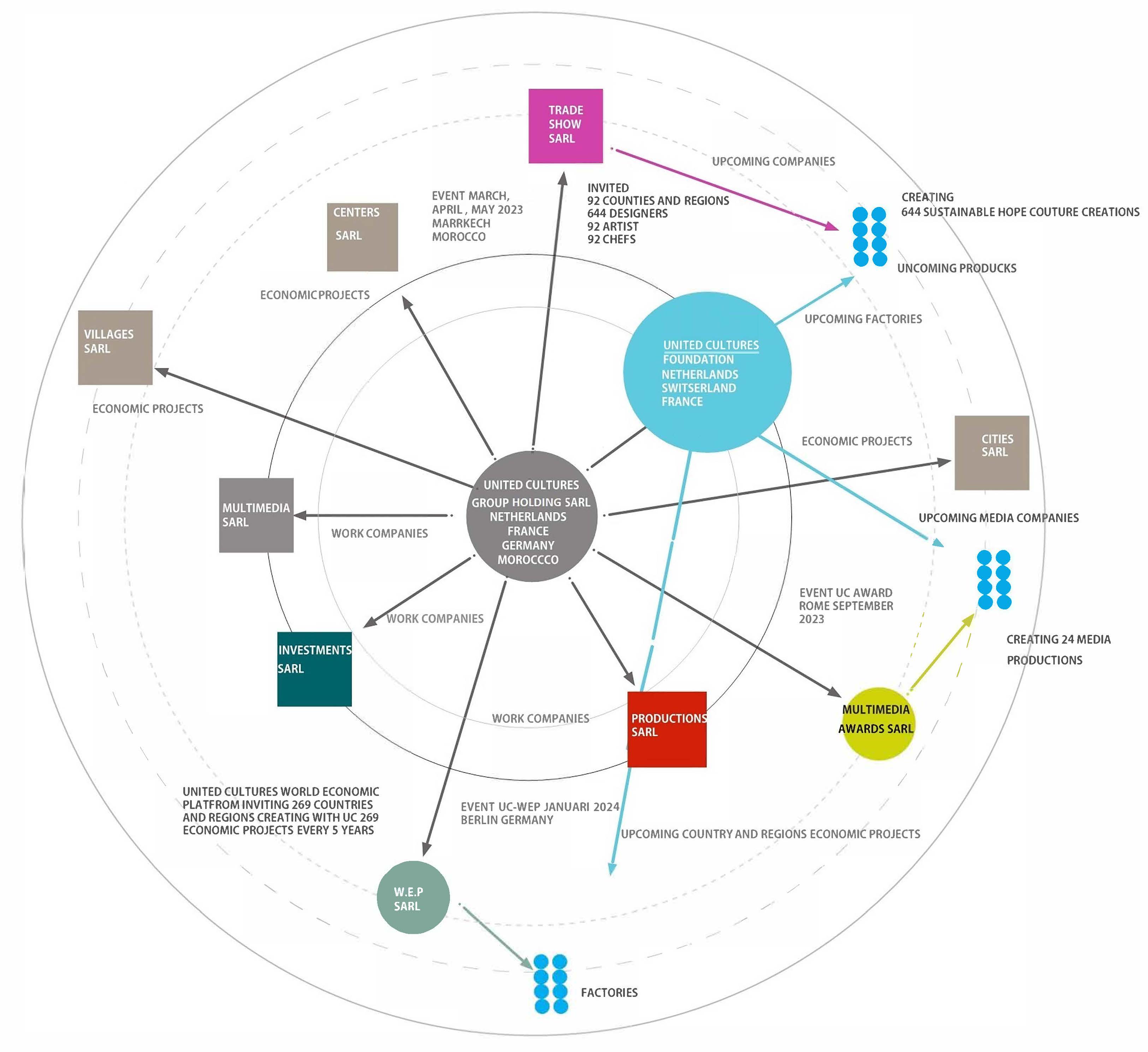 Is founded to partner up with (embassies, companies,cultural institutions, culture representatives, organizations, artists, cultures, NGOs and universities) to become partners in different projects. The Partners will work closely together with United Cultures to develop various economic projects for all cultures in the world.

Will build with cultures a strong, financial international organization. This will be achieved by our projects and products supported by investors, banks, sponsors, governments, and other potential shareholders. United Cultures Investments ltd. will invest in cultural sustainable projects in the fields of art, culture, sports, music, design, media, fashion, beauty, economy, education, science, politics, and technology in countries and regions In this way United Cultures will support the economy of cultures in countries and regions and achieve peace, understanding with cultures in member states.

The United Cultures Productions is also a platform where professionals can apply for jobs in different United Cultures projects in the fields of: media, culture, fashion and beauty, economics, education, science, politics and technology. The United Cultures jbs department will make that possible and will be online.

The United Cultures Productions will be the market leader in intercultural events, in which respect and values of cultures are placed first.

Will show that diversity of cultures makes society stronger and richer . It is designated as the umbrella media entity, where new media ideas come together and work together within the United Cultures projects.

United Cultures Media is a network with creative cultural media makers worldwide, that stimulate and initiate media productions for cultures

United Cultures World Economic Platform is a world economic event that can boost a economy of an country and region and to create jobs by developing 269 economial projects worldwide.

Is a yearly event in which awards will be given in eleven cultural categories. Each cultural media maker will have the right to send thier media productions to us. United Cultures Award jury will pre-selection the media productions send in. The best contributions of each category will be shown to public on television and will be heard on the radio.

Is a Center where meetings of countries, regions and cultures can take place, where Ministries of Culture per country, region or culture representatives will be represented, where NGOs, cultural institutions, universities, companies, cultural artists and middle clas of each culture can meet and organize meetings.

United Cultures City, will be build every 5 years where all Ministers of Culture and representatives of cultures in 269 countries and regions will be representing their cultures. The creative economy of the 269 countries or regions will be classified in a country or region street in the United Cultures City. United Cultures street will have museum, location for the ministry of culture, warehouse to show resources and products, business and education center, cultural university (culture, health, technology and other studies) restaurant, lunchroom etc. United Cultures City you get to see a close-up of the intense cultural feeling and experience within such a small city circle.